On Tuesday 27th October, 2018, we had the great honour and privilege of presenting the YMCA ‘Order of the Red Triangle’ award to Benjamin Grimsey.

A long standing supporter of YMCA Exeter, Ben served on our Board of Trustees during the 1990s as well as on the Diocesan Board of Mission, through which Ben gave many years in service of others across the county.

Ben was presented with the award by Simon Johns, Joint CEO at YMCA Exeter. He gave a moving tribute to Ben, acknowledging the influential role he has played both within YMCA Exeter and the Diocese of Exeter.

This was followed by a speech from the Right Rev Robert Atwell, Bishop of Exeter, who as President of YMCA Exeter, thanked Ben for his lifelong contribution to supporting homeless young people. Ben simply responded with the phrase, ‘It’s all part of the job’. 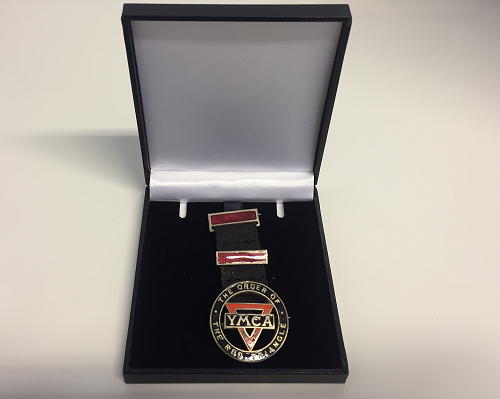 The ceremony was also attended by Emma Osmundsen who is a trustee at YMCA Exeter as well as Warden at St David’s Church where Ben, and his wife Margaret, are both members. Ben was also presented with a copy of our brand new history book, which describes the story behind The Order of the Red Triangle. It is the most prestigious award issued by YMCAs across the country in recognition of long and voluntary service to the organisation. Only two other awards have been given by YMCA Exeter throughout our 170 year history.

This site uses cookies. Not the delicious kind; the computer kind. You can find out more info about this by clicking: Find out more